Picking the next place we are going to explore is never hard. We have a list of places to go, and we pick whichever excites us the most. When A told me about the Atlanta Prison Farm, it was a no brainier that it was out next location.  M (A’s roommate) even decided to tag along for the day to see it. 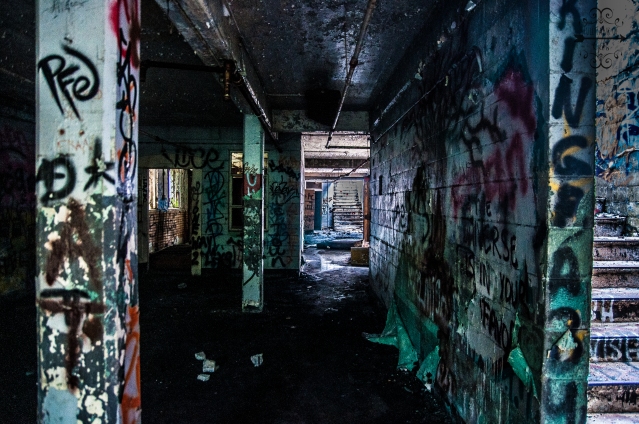 I should have known this trip was going to be different from all of the rest we have taken. For starters, A wasn’t late picking me up. She was early…so early, that I was no where near ready when she got to my house.

We started out for Atlanta, but had to make one stop along the way. We needed flashlights. So naturally we went to Bass Pro Shop! After spending 30 minutes debating which flashlight we each needed, we were on our way. 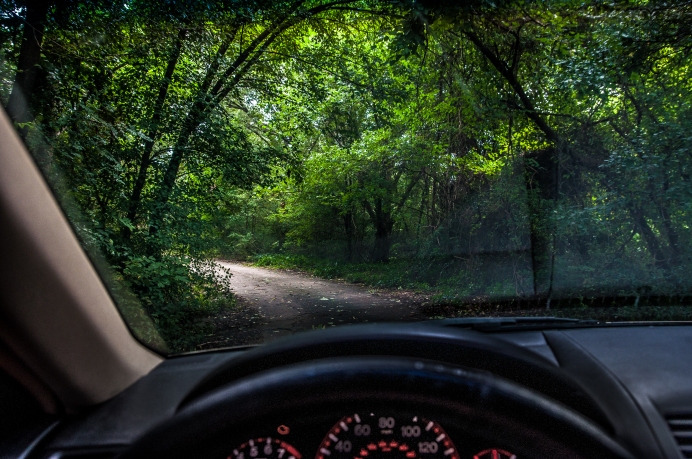 The Prison Farm is about an hour from Athens, Ga. We turned that into an hour and a half. And by we, I mean M. She is a bad navigator. That, and A is such a careful driver (which is funny if you know her, she used to drive crazy).

When we finally made it to the farm, I got an awful feeling. The end of the driveway is marked with a “no trespassing” sign. Not a “violators will be prosecuted” sign. Not a “if you decide to go in here you are going to get fined and spend the rest of your life in jail” sign. But, for some reason once we pulled up I felt like I was in big big trouble. Honestly, I wanted to go home. That, or drop me off and I will walk home, which isn’t a good idea in that area. Thankfully, I wasn’t the only one that felt that way. 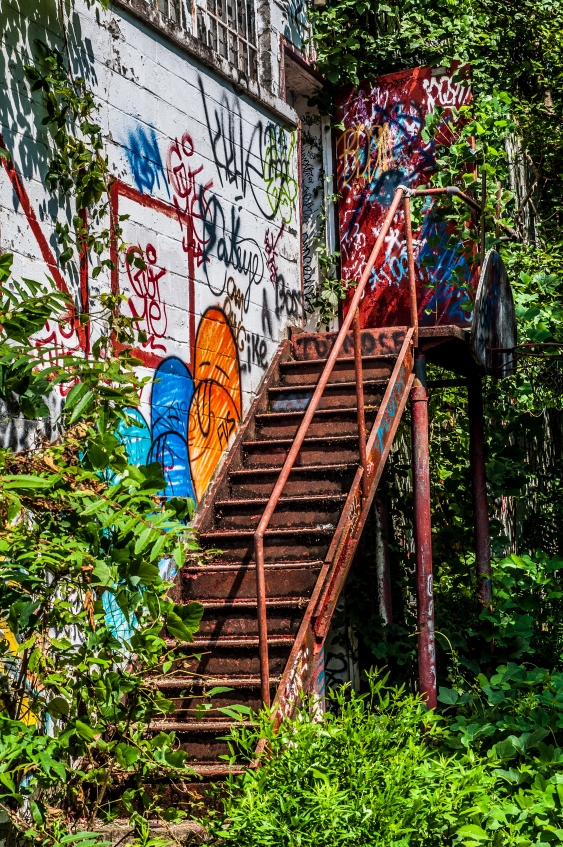 Since we all felt a little uneasy, we decided to start by taking pictures outside first. The outside was overgrown and rundown. To the left was the boiler room. At least that’s what I’ve been told it was. To the right the actual housing for the inmates. 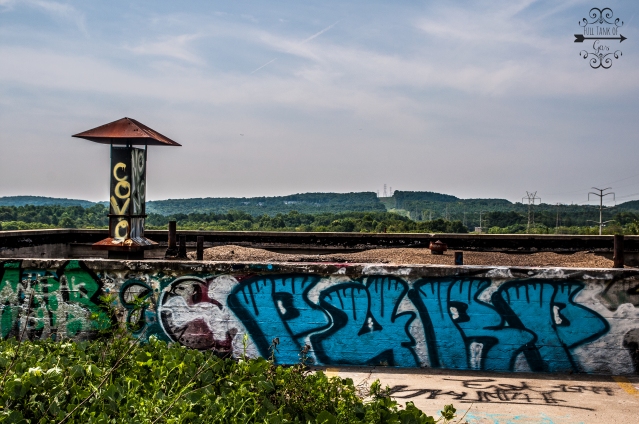 The boiler is built on a hill, I guess. You have to be careful when walking up to the building. There are holes, big enough to fall in, that drop 15-20 feet to the bottom. The building is pretty much a loss. Nothing but walls. Not really much to see. The side where the inmates where housed is absolutely amazing. Even though it’s completely overgrown, and the top floor destroyed by fire, the building is beautiful. 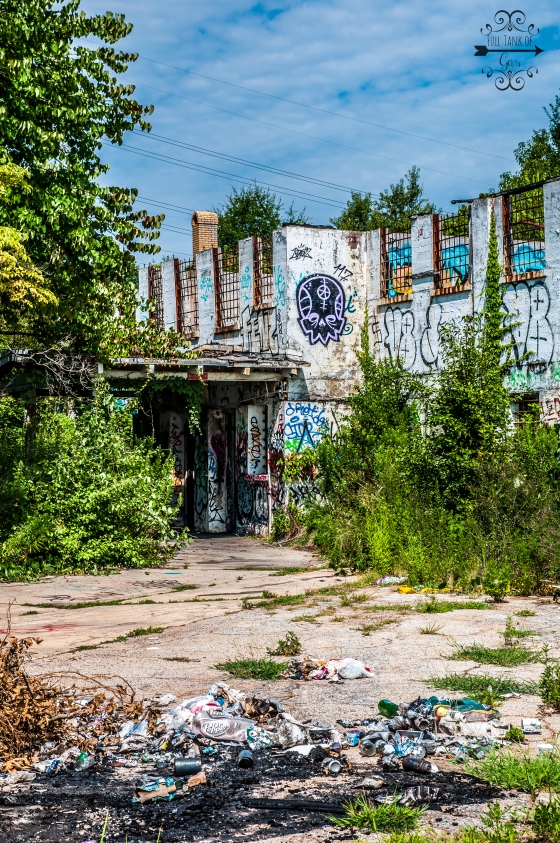 To the left is a separate building with the entrance to the jail behind that (this is the door we enterwhen we finally go inside). The separate building was a little too overgrown for the three of us. That and the windows where clearly used for target practice.

The inside of the main building has been filled with amazing artwork. Now I’m not one that would graffiti a wall. I prefer to leave a place how I found it. But, the artwork here really makes the place  that much better. 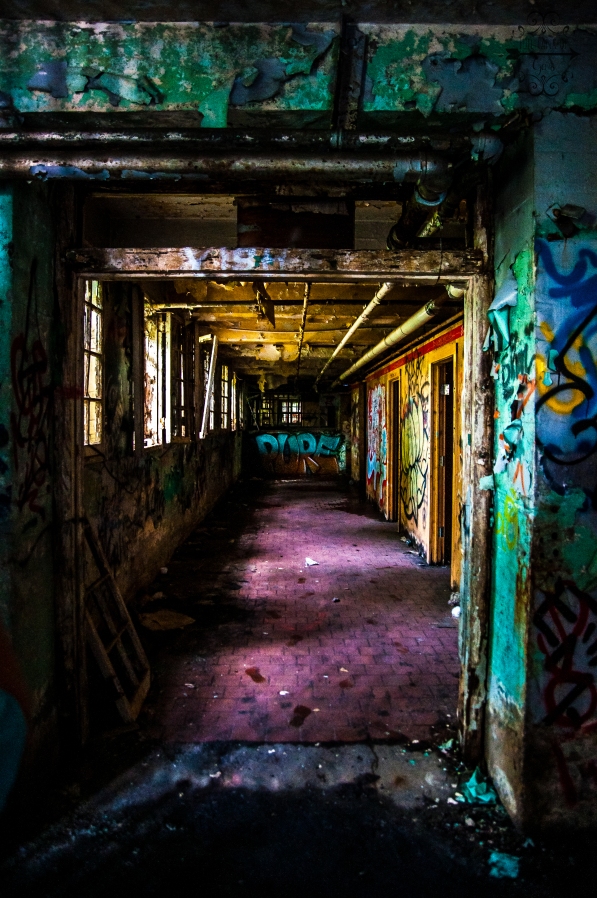 After we took pictures outside for a while we decided that it was time to go inside  so we stood at the door for a REALLY LONG time. Once we finally decided to go inside we took turns stepping inside the door one by one. I have been in abandoned buildings before, but if I had been standing back looking at us, I would of wondered what our problem was.

We took about a good 30 minutes to get the three of us inside at the same time. And, once we did we ran up the stairs like somehow being on the top floor would save us if something bad happened  like I said before I felt like I was about to get arrested, A felt like her car was getting stolen, and M, well M didn’t seem to really care. But, as you can tell the top floor wasn’t going to help us if any of our fears came true. 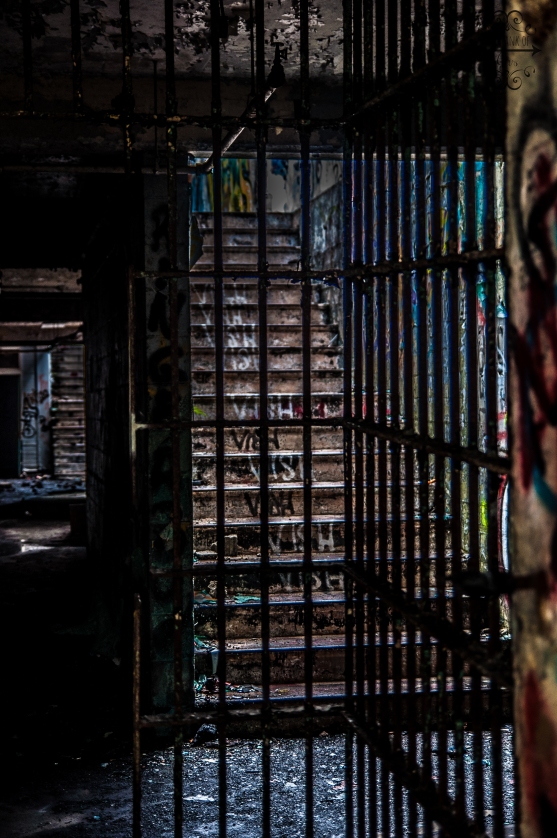 I do want to state for the record I bravely went in first!

We weren’t inside terribly long. It was super hot outside and my heart was getting ready to explode. Since I kind of need my heart, and A was feeling the same way, we left. We saw maybe 1/8 of the inside. That’s with me being generous.

We didn’t go left or right too far. Just up. I think M was wondering what our problem was. She was under the impression that we were professionals that had no fear. Funny thing was, so were we. Yet, here we were, leaving with our tails between our legs. 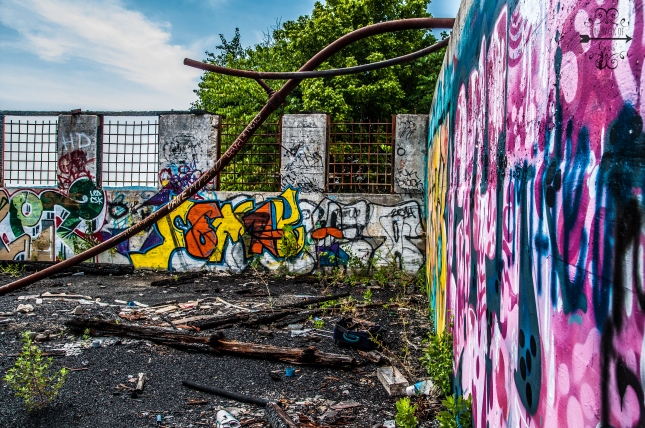 On the way out we noticed a deer crossing sign riddled with bullet holes. That is a great thing to see when your heart is already beating out your chest. I couldn’t get off that road fast enough.

We did make one stop on the way out. To take a picture of the Atlanta sky line in the distance. I felt instant relief when we turned off the road. I actually wanted to go back. We decided that we needed to regroup, try to find some other places, and then decide if we wanted to go back. 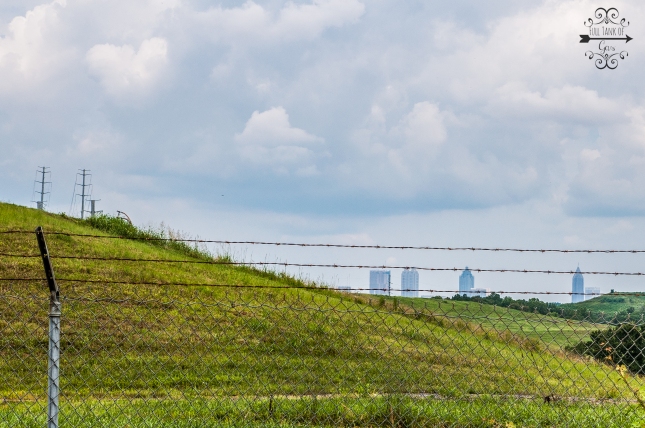 The rest of the trip was a pretty big bust.  We tried to visit an old school house, but later found out it had burned down. We also tried to find some old fairgrounds, but quickly realized there wasn’t much to see. We did, however, find a huge apartment complex that was boarded up and abandoned. It was surrounded by a gate. The one vehicle inside didn’t really seem like the type that would be very excited to have someone walking around. 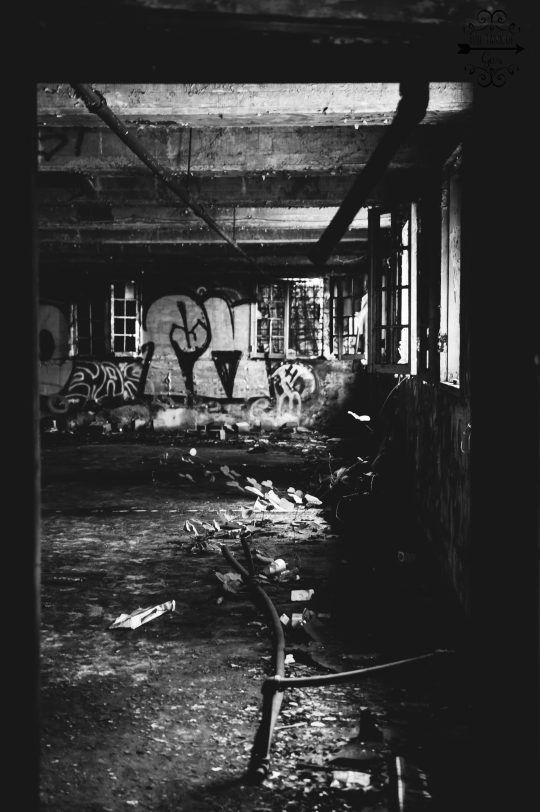 So, finally, it was the moment of truth. Were we going to go back or go home? We ultimately decided to go home. We decided to visit again in the fall when the weather is better, the weeds aren’t so overgrown, and we aren’t as creeped out.

Something about this place got to us. A felt weird editing the photos and my blood pressure is up writing this post. But, we will be back.

I would like to state for the record, that upon entering the prison, my shutter failed and wouldn’t release. After that, my camera refused to focus. Believe what you want, but the heavy feeling I had, was not from the humidity.
-A