After our trip to the Harville house, we were determined to make the next stop a great one. I punched in the address for the Statesboro Packing House, and we started out that way. It was pretty easy for us to find, but we were a little worried about leaving A’s new car on the side of the road.

I called a friend that lives in the area to see if he would drive us over. He was on his way home from out of town, so we decided to head to Panera for lunch while we waited.

After lunch we headed over to CB’s house. We loaded up in the car and headed back to the meat packing plant. We took a different way in this time around, and ended up parking on a side road. There was a little boy (10 or 12ish) walking down the road with a cell phone. He stopped and wanted to know what was going on with us. He asked a million questions. Where were we going? How long would we be there? Did we know it was haunted (see everything is haunted)?

When I was his age- or even now- I would not be talking to the car that pulls up behind me, stops, and people get out. I would keep on going- nope, you are kidnapping me today! To say the least, the kid creeped me out. I was not a fan of him at all.

The plant is a four story building made mostly out of concrete, with no windows or doors left to keep any one out. Everything I have been able to find about this building is about how haunted it is. Once again, I didn’t see any ghosts here… but I don’t discount what anyone else has seen.

I have found a bunch of different versions of the history of the plant. All have a fire sometime in the 1920s, but the severity of the fire seems to change. At times 20+ people were killed, and other times it was already a vacant building. Feel free to do some more extensive research and let me know what you find out- I want the truth.

The building itself didn’t seem spooky to me. I was pretty comfortable once we got inside (maybe the boy out front was worse than whatever was inside). We explored the first floor for a while. Eventually, we made our way to the second floor. A takes a little more time getting all the amazing pictures, so I did most of my exploring with CB. 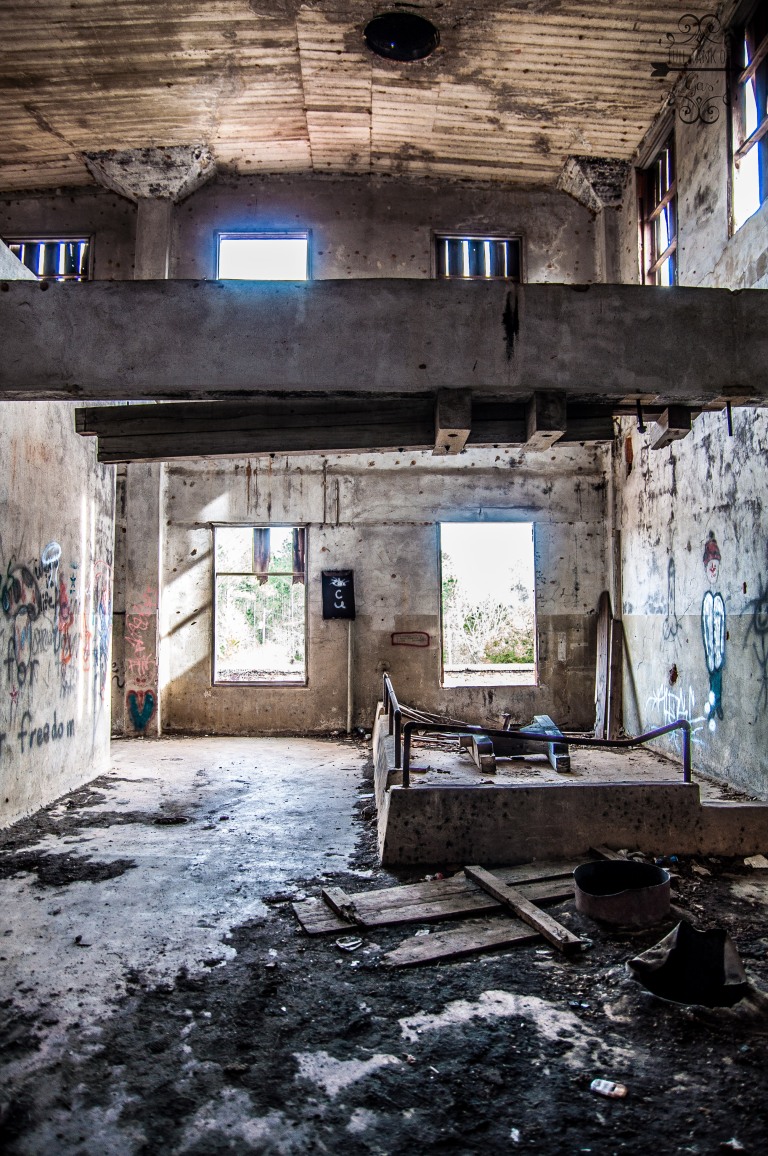 There isn’t a whole lot left inside the building. There are big sliding steal doors that are amazing. They would look amazing if someone repurposed them somewhere else. Some of them had graffiti on them, but I think it would be easy to get off. 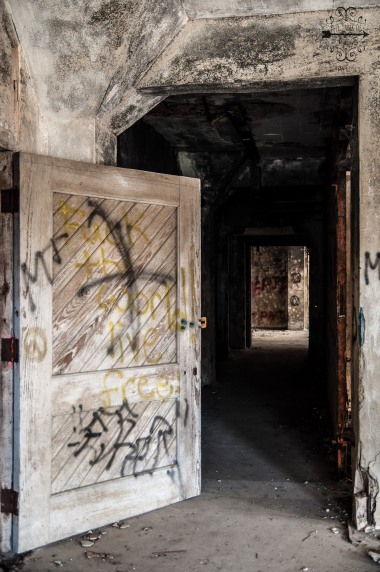 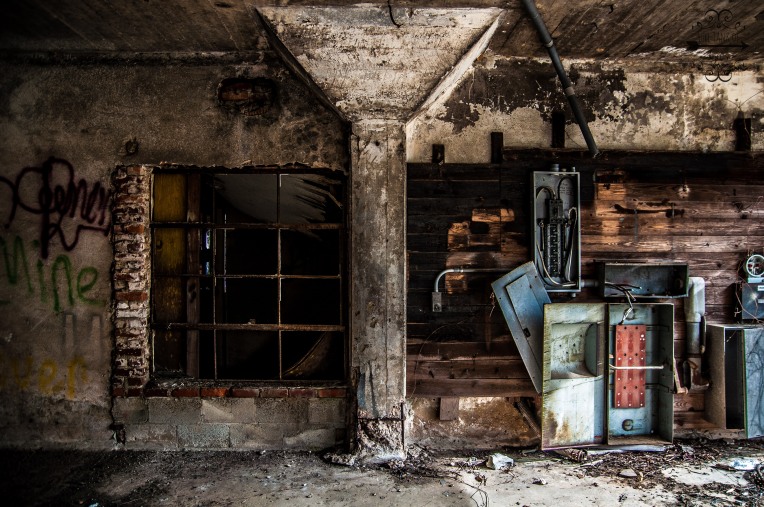 The walls are also covered with graffiti. Some better then others, some not appropriate, some just plain out dumb, and a LOT of cuss words. I’m pretty sure its a bunch of high school kids, that just learned how to cuss, who decide to graffiti the walls.

We made it up to the third floor, and the stair case we were on didn’t go up any higher. CB said last time he was there this was as high as they got. I was bound and determined to make it higher. Thankfully, A was able to find a second staircase to take us up. 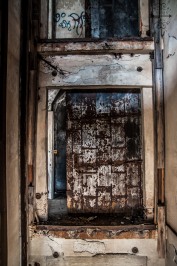 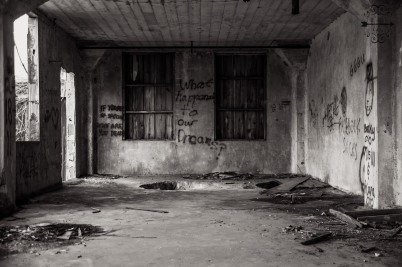 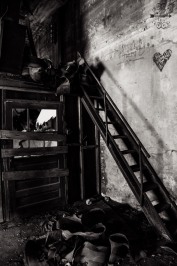 As soon as we got to the forth floor, I noticed a steel ladder that kept going up. I wanted to climb the ladder, but CB was already half way up. It went up to the roof, and there wasn’t much to see. So I didn’t waste my time going up it. 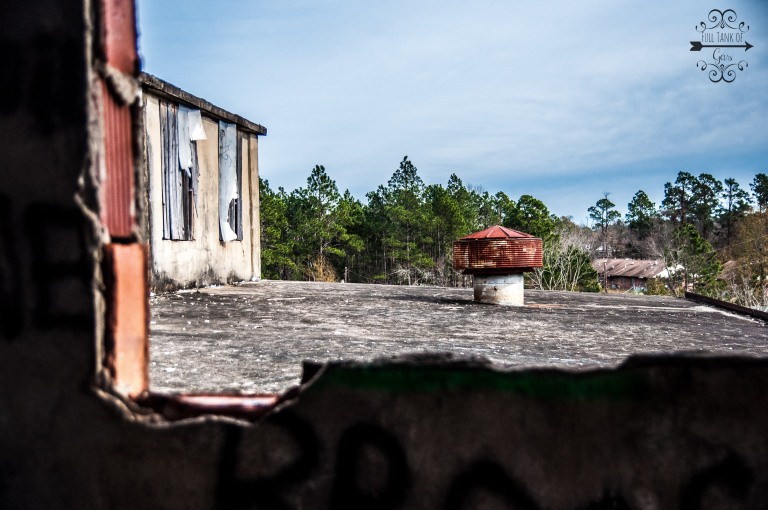 Even though the building at some point in the 1920s caught on fire, I couldn’t tell. That is until the weird room on the forth floor. It honestly looked like it had just caught fire and been put out. And maybe it had, I don’t know… There were a few rooms we didn’t go into, they were dark, full of trash, and the floor didn’t look stable. Maybe the marks of the fire were shown there a little more in those rooms. 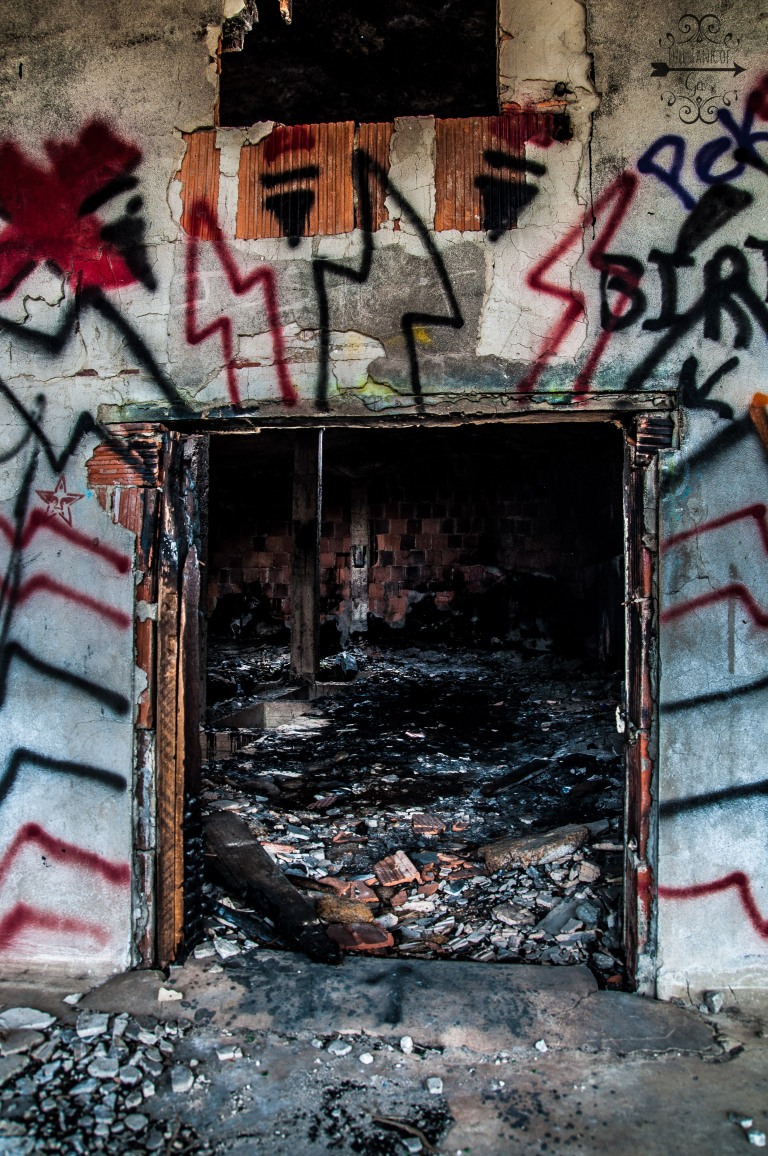 I tried to stay away from the front windows as much as possible. I didn’t really feel like explaining to a cop that we were just there to explore it. I also made a point not to get to close to the elevator shaft. If you weren’t paying attention you could walk right into it. In fact, in one of the stories I read about the building, a teenager fell to his death in one (who knows if that’s true).

A finally caught up with us, and we made our way back out. I have to say a big THANK YOU to CB for saving this trip for us!

So we decided to make a video of our trip to the packing house. So if you want to see more of what it looked like head over to our channel on YouTube and let us know what you think. Be kind….we write blogs and take pictues… we aren’t so good at the video thing (yet).

One thought on “Statesboro Packing House”