I ended last weeks blog with leaving the ruins and walking toward the beach right? I bet you have been dying the entire week wondering were we were going right? No? Well to bad… I’m going to tell you anyway!

But first, I’m going to tell you what I’ve left out! When you look at anything about Cumberland Island, or the Dungeness Ruins, you see the big house right? Well there are tons of other buildings (or ruins), that I found just as interesting. The problem is that no one tells you what those buildings are! They aren’t on any map (that I found), and not much (if anything) is said about the other buildings. I honestly want to know what they are. 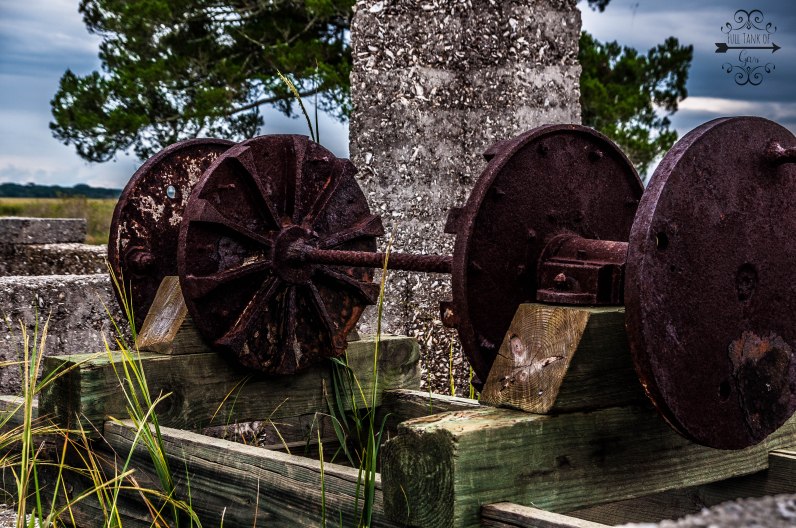 Ok so a few of the buildings do have signs telling you what they are. The Tabby House was the first labeled building we found. It was nice to know that it was the oldest structure on Cumberland Island- that was still standing. But, like Dungenss Ruins, you aren’t permitted to see inside. I guess you could walk up and look in the windows… but that was not what I wanted. I wanted a full on tour of the inside. I’m needy like that. There probably wasn’t much  to see. 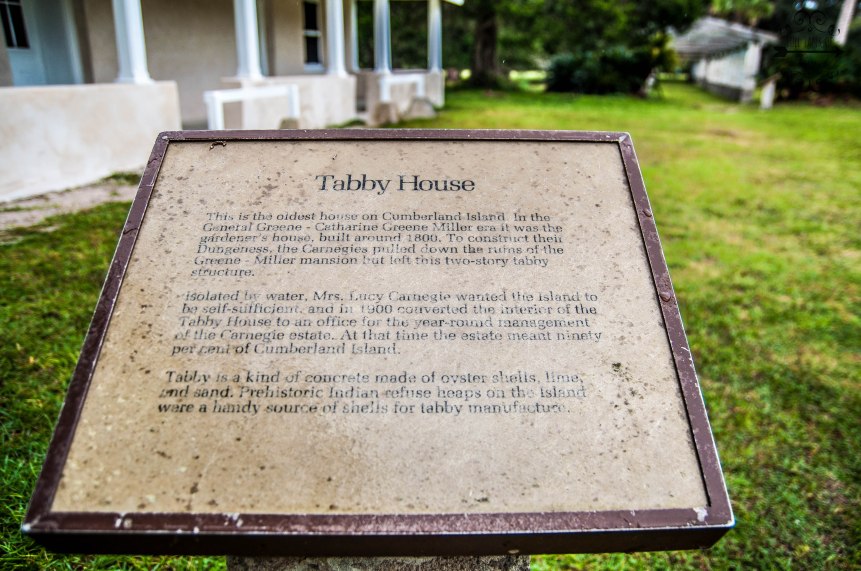 Another “building” that is labeled is the Pergola. Which really isn’t a building, but I know was breath-taking in its day with all the flowers. The sign, however, doesn’t really read much about the Pergola. More about how amazing the island was, and why it was a perfect setting for such a large house.

The saddest sight I saw all day was the Recreation Building. Time has taken its toll on the poor building, and it was being torn down as we were on the island. Now, I’m not saying that it didn’t need to come down… I’m sure it was a hazard to guests (especially they ones that don’t want to follow the rules), but I am sad that by the time I made it there not much remained. It was also blocked off (for everyone’s safety), so we weren’t really able to get close.

We left the Dungeness Ruins (and the rest) in search of anything that we found interesting and the Green-Miller Cemetery. Ok we were also looking for a bathroom. Looking at the map given to us at check in, we thought we would find the bathroom right across from the bathroom. We were wrong…

We found the bathroom with no problem. But, as you can tell the map wasn’t really a great map. Its one of those maps that make it look like there is nothing around other than the ruins, the bath room, and the cemetery. But, that’s not the truth. While I’m sure this map works for normal people, it did not work for me. I wanted a map with every building, ruin, tree, and turn on it. Ok maybe not every tree… but something a little better than what I got would have been great!

Looking at this map the Green-Miller Cemetery looked like it was almost across the street from the bathroom. Or at least not really that far… and I know it wasn’t just me that had a hard time with this. I asked around. No one could find it. Most people thought that it was closer to the Dungeness Ruins… like maybe in the field someone close to it. We walked all around looking. Even walked down the road next to the Recreation Building, which lead to a dock on the river that was no longer used.

Well I wasn’t giving up… I was going to find it… it was personal at this point. And finally I found it! Spoiler alert for anyone going to Cumberland Island and wanting to spend hours searching for the Cemetery…. It’s across from the Carriage House (which isn’t much of a carriage house- at least now- more like a shed). 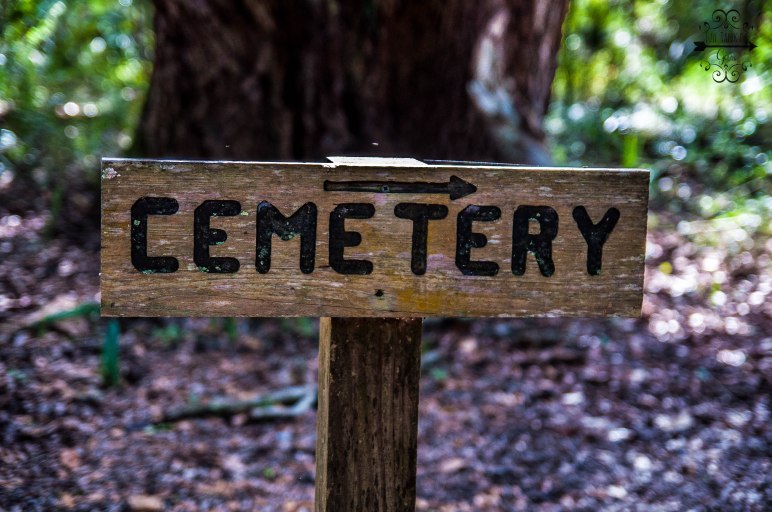 So I proudly walked to the cemetery… Well, what I thought would be the cemetery. It turned out it wasn’t. It looked like it was some kind of foundation to a building. Maybe a church? (I really need to know- so if you know… TELL ME!) There was a little path that lead into the woods. A and M didn’t seem to trust that the path actually lead anywhere, other than to our certain death… But I was determined. I headed down the pathway, A and M following a safe distance behind… you know, to make sure they have time to run if I die (they are great friends like that), and I actually found it. 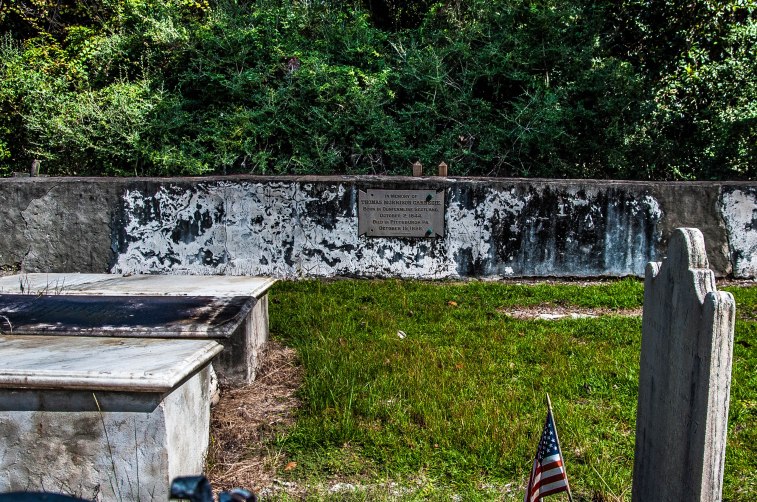 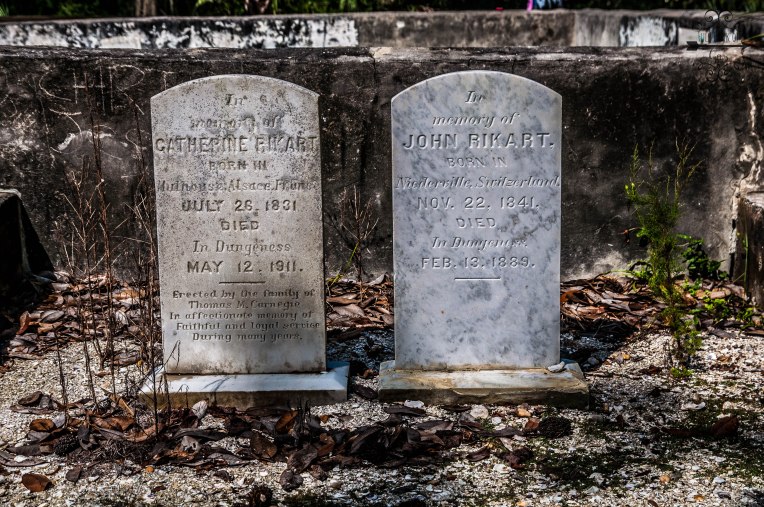 I have to say it was a beautiful setting for a cemetery. It sits right on the water’s edge (river not ocean), and couldn’t be prettier. I was so proud to have finally found what I was looking for! 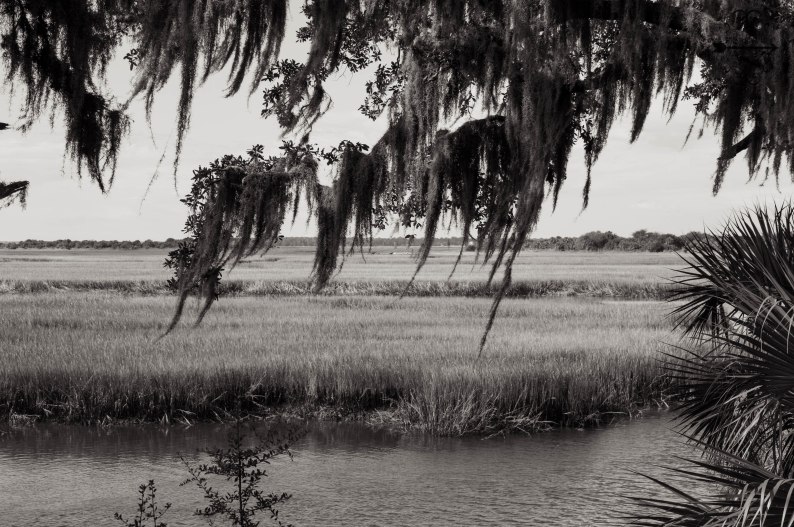 I’m going to write a separate post later on giving you a little bit of the history of Cumberland Island. But, as you know I love history and that’s why I wanted to find the cemetery so bad! Ever heard of a man named Robert E Lee? If not (and you are from the USA- I never thought I would need to say that in a blog!), stop reading this blog and go look him up… Well his father, Gen. Henry Lee, was originally buried in this cemetery. He was later moved to his son’s grave site at Washington and Lee University. I visited Washington and Lee when I was in middle school with a friend and her family, and I feel in love! I can say that I have seen both of Gen. Henry Lee’s gravesites! (Thank you to the Edenfields for putting up with me and showing me amazing places!)

The cemetery is walled off and we didn’t go inside out of respect (and we were following the rules). A took so pictures, M got some video and we decided it was time to head to Sea Camp Beach. We of course didn’t want to take the route where we needed to wade, so we headed back to the main road.

Next week will have our time and Sea Camp Beach! We hope you are enjoying our trip through Cumberland Island!