First things first…. WOW! A’s post on the Taylor Memorial Hospital went viral! We never expected so many people to see it, but we are very excited that so many people enjoyed it!

Our latest trip went a little differently than most do. We didn’t have a destination picked out. We got in the car and just drove. I picked up A around 10 o’clock and headed north. I can honestly say, I was a little worried starting off that they day would be a big bust. Thankfully, it wasn’t.

We started driving straight up 441. A steadily pointed out places to stop and take pictures (as we passed). I asked numerous times if she wanted me to turn around and go back. Her answer was always “we will come back this way.” That was until A saw a little store with a ton of old cars. Unfortunately the store was closed, but we pulled right over to the side of the road to take a few pictures.

We started looking for a good back road, but neither one of us could make up our minds as to which road to pick. A finally decided that we should head over to Highlands, so I started that way.

A and I have been to Highlands, NC a few times. Usually in the fall when the leaves are changing (makes for amazing pictures). We stopped by the few waterfalls that we had been to before, but we wanted more. While driving along 64 we spotted a little store with a sign “free waterfall maps.” What is better than a free map showing us exactly what we wanted to see? We I can’t tell you, because we never found the free maps….

We did however find a few books and a magazine that would give us some information about waterfalls in the area. We decided on the magazine “The Wayward Traveler’s Guide to Waterfalls and Back Roads.” The nice lady from the store showed us the map and legend of the falls in the front. We both got really excited when we realized that in blue were waterfalls you can see from the road.

We had already visited Dry Falls and Bridal Veil Falls, so we set off to see Cullasaja Falls and Bust Your Butt Falls. Now, for the full effect of this story you need to know we had already been up and down 64 at least 4 times and had NOT seen either of these waterfalls. But, knowing that The Wayward Travelers were not lying to us we set out again to find them. The great thing is that they have miles to each waterfall!

Bust Your Butt Falls was up first. We needed to go a little over 2 miles. After traveling 2 miles…. we saw nothing. The magazine read that it is a popular swimming area… It may have been a little cold for swimming but we still expected to see something. We turned around- again- and kept our eyes open to see it. Finally we saw it… not much of a waterfall… or a swimming area, as the water was way down. If you are looking for waterfalls in this area don’t waste your time looking for it if you don’t see it right away… it’s really not worth it.

Cullasaja Falls did not disappoint, but once again was hard to spot. We had the windows rolled down, listening for what sounded like a waterfall, and pulled over at every little stop just to see if that was it. The Wayward Travelers tell you to be careful, and that the small pullover only holds a few cars… They meant it. There was one other car pulled over, once we found it. I was a little worried that my car wouldn’t fit for us to safely get out. But it did thankfully. I would spend the extra time to find this one. It was great. 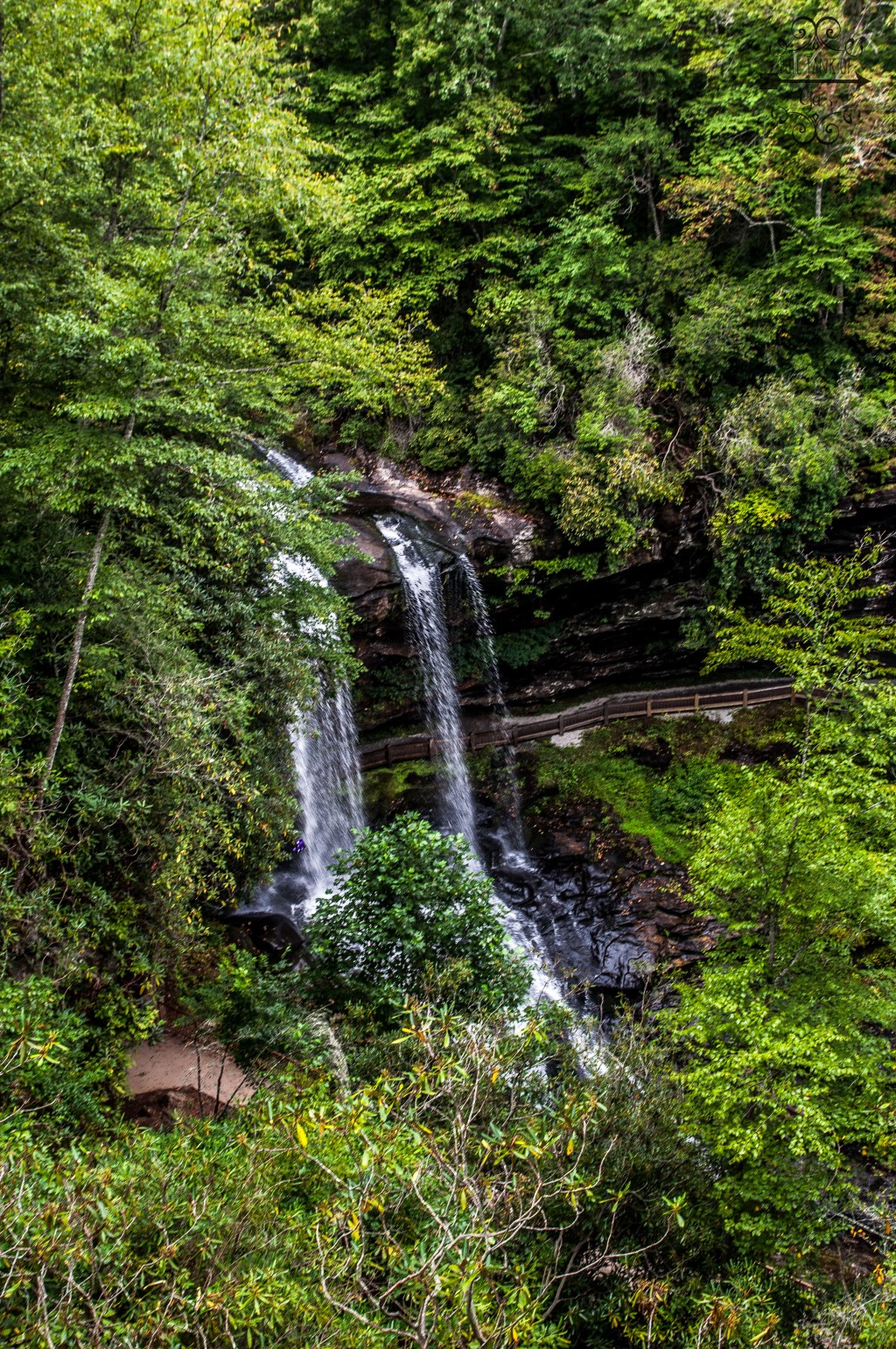 We started back to Georgia down 441. A wanted to stop to get some something that was weird…. So we pulled over at one of the stores along the highway. I love these little stores. They have the funnest little things in them. When I am in them, I have to remind myself that I don’t have any room in my house for that, I don’t need the jars of jelly, and I can’t eat all the candy. A got what she came for and I managed not to buy anything (be proud of me).

We had a little bit of time left in our day and decided to try to see one other waterfall. A picked out Stonewall Creek Falls. Following the directions, this one was a little easier to find. It was supposed to be another waterfall that you could drive right up to. The magazine stated that as long as you had a high clearance vehicle you could make it. I drive a Jeep… I figured I could make it, and we were excited. But, once we got the to the road it was closed. 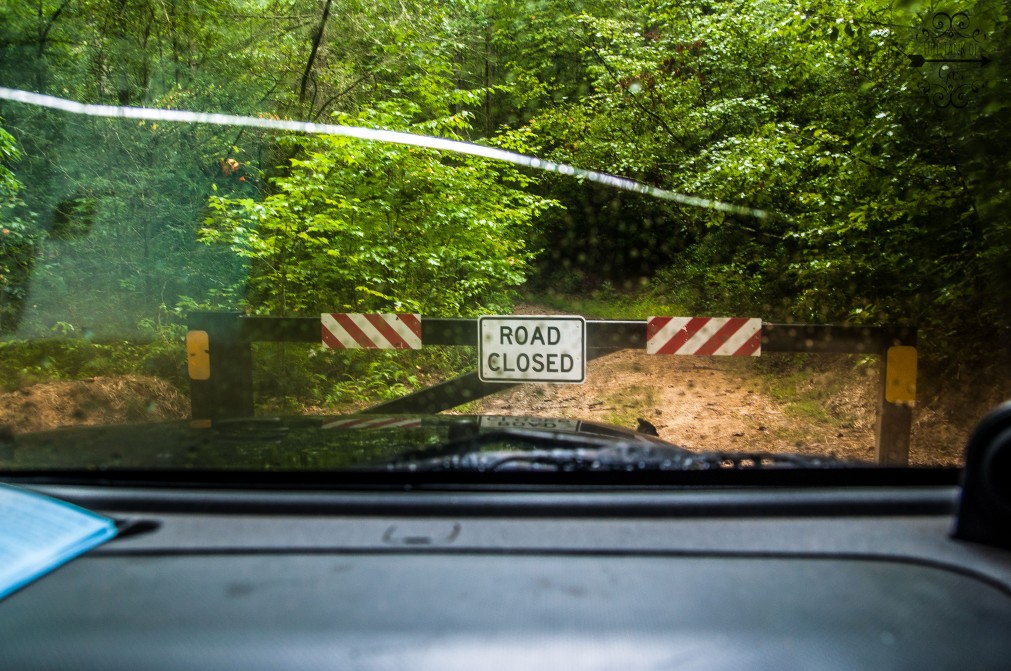 So our long hike (haha) down wasn’t so bad. My jeep could have made the trip no problem, but other vehicles would have had a little bit of a problem. So I can’t really blame them for closing the road. We didn’t stay long once we made it to the waterfall. The rain was a little downer, so we started back to my vehicle. If you decide to walk down the trip really isn’t bad, and the waterfall is worth it.

The Wayward Traveler’s Guide to Waterfalls and Back Roads is a great tool if you love waterfalls! They give great directions and even rate each waterfall for you. I would suggest spending a little time reading it before you set off on your trip.

Later this week we will be back to showing you the beauty in abandonded and forgotten buildings, but it was nice to show your the beauty in nature this week. Thank you so much for all the love and support we have gotten recently. If you have any suggestions on where we should go next please send them to us!

One thought on “Highlands, NC”