According to the weather channel we were setting out for our next adventure on what was promised as a warm and sunny day… But, once again we set off on what ended up being a cold and rainy day. To be fair once we got into south Georgia it was mostly just foggy with very little rain but still very cold. Either way we were determined to make it to Crystal Lake in Irwin County. Vanishing South Georgia (amazing pictures- check it out) was our inspiration for the day. All the pictures we could find of the abandoned water park were breath-taking. A really did her research to find the location. According to google maps there was an old check point but no actual gate blocking entrance to the park… However, just like the weather channel, Google maps lied! It seems that the park is now hunting property blocked by a gate with a million “NO TRESPASSING” signs advising that violators will be prosecuted. Seeing how neither of us feel we look all that great in stripes, and like I’ve said before A and I both still need our day jobs, this was unfortunately as far as we got. Rest assured we will be back… as soon as we can find a legal way in (that way everyone is happy).

Not ready to end our day with less to show then from our trip to Tennga, we settled on finding Holt Grocery (also from Vanishing South Georgia). Even though it wasn’t something that would normally warrant a three-hour trip for us, we still wanted to see this little piece of beautiful history. According to the blog it was located on Hwy 32 somewhere between Holt and Ocilla. Leaving from Ocilla we started down 32. And kept going….and going… and going… (we are both slightly impatient and need immediate results, especially after our first failed attempt for the day). To prove how impatient we are, as soon as we hit a sign that said anything about Holt we turned around… cussing the fact that we once again had failed and pointing out everywhere on the side of the road Holt Grocery could have once stood and giving every scenario (likely or not) as to why Holt Grocery was no longer standing there so we could take at least one little picture of it. After re-reading (kind of…more of looking at a different word on the page) I told A to turn the car around that it was near the BBQ place we turned around near.

A started back toward Holt.

We got to the BBQ place.

We have once again failed.

We find a road it may be down.

It wasn’t down that road.

Clearly this place no longer exists.

Ok so after I actually read the words on the blog we drive a little further (very little) into Holt and found just what we are looking for. I mean who would of ever guessed that Holt Grocery would be located actually in Holt. Thats just not logical. Am I right? Ok, I’m wrong, anyone could of guessed that. My bad. Holt Grocery is located on the corner of Hwy 32 and some other road (I have no idea what the road name is). A house sits right behind the building but no one came out for the few minutes we were there taking pictures. This little gem saved our trip from complete failure and brought our sprits back around.

After leaving Holt we decided it was probably time to eat something. We heading over to Wendy’s in Fitzgerald. It was an odd place. After placing my order and paying the cashier asked “Can I put this down?” Um… yeah…. I just ordered and paid you for it…put it down…I’m hungry now. Welllllllllll it turns out I’m a little hard of hearing and she asked if she could put “Liz” down. Well no honey you can not, my name is not Liz! After telling her my name I stepped to the side so that A could order. Not two seconds later (with me still standing right there might I add) she calls “BEST” as loud as she possibly could (like the place was packed and “Best” was standing in the back of the building behind a practicing marching band with earmuffs on). I calmly grabbed my food and sat down. To be honest she probably just thought I was hard of hearing and was trying to be sweet.

The trip was not a complete bust. We had a blast together and got another funny story out of it. But lesson learned. Next time we decide to make a trip to Ocilla we will take my Mawmaw. She would of had a good ole time riding all the roads, and probably could of pointed out millions of places to take pictures of and then given us the history of all of them.

As always all pictures are taken by A! 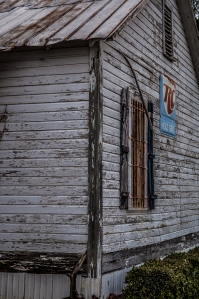